Inspiration for the Book

Paolino was an inspiration, but he was hated by Lucia and only tolerated by Kay Cee. The kitten, on the other hand was playful, adventurous, affectionate, happy and mysterious. He seemed to have the soul of a mystic, observing all of their actions intensely and somehow communicating to them with higher awareness of life. He looked straight into their eyes when approaching them, and he greeted visitors, perfect strangers to him, with an affectionate acceptance. 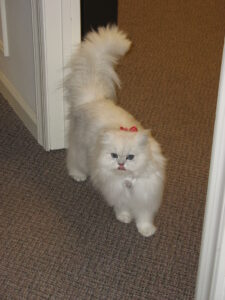 People meeting him for the first time were entranced by his brilliant aqua eyes – all at once riveting, gentle and penetrating. To a person, they were compelled to remark about his eyes and his special qualities.

Pao’s honeymoon period ended abruptly one morning when he was with Kay Cee on the patio outside the kitchen sliding doors. Since they lived on two acres in a rural wooded area of New Jersey, Regina would let the kitties out for short periods. On this morning, she heard the cries and ran outside in time to see Paolino crouching in an awkward position and Kay Cee hiding. In the more than ten years that they had lived in their home, they had never had an attack by any animal.

But here it was, a vicious feral cat had just attacked Paolino and Kay Cee. Pao had been bitten on his rump, most likely as he was trying to escape, and Kay Cee on her tail. A trip to the vet, shots and medicines followed.

Kay Cee recovered quickly, but Pao’s attack resulted in his contracting Feline Immunodeficiency Virus (FIV) or kitty AIDS. Regina’s precious little boy would be infected for the rest of his life, and she would become his primary caretaker, a difficult task given her demanding job.

Pao began to have elimination issues, refusing to use his litter box and having many “accidents.” Wee-Wee Pads became the norm around the house, and Regina gave him special treats to cheer him – rotisserie chicken, filet mignon bits, fish chunks – in addition to his regular cat food. She sang to him two of her favorite songs: “You Are So Beautiful” and “You Are My Sunshine.” She still replays the words to this song over and over in her mind: 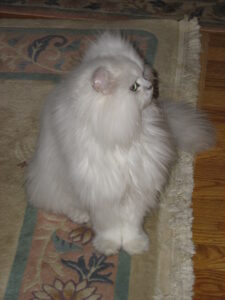 “You are my sunshine, my only sunshine

You make me happy when skies are grey

You’ll never know dear how much I love you

Please don’t take my sunshine away”

Pao would look deeply into Regina’s eyes as she sang to him, that is, until she sang, “Please don’t take my sunshine away.” Here he would nervously turn his head to look away . . . every single time.

During this period of his illness, Regina cleaned up his messes, told him how much she loved him, gave him treats, played with him, groomed him as best he would allow . . . all the while aware that she did not resent one moment of the extra work. In fact, she felt somehow blessed by the added responsibility. This was new for her, a fulltime career woman, who previously did not want to be interrupted by any extraordinary burdens of living, now loving the extra work required to care for her little Paolino.
Pao had always loved being able to go outdoors into the sunshine, to feel the wind against his face, to smell the bushes and flowers in the garden. He LOVED the outdoors. Now, because of fear of the feral cat — even though Regina had reported the attacks to authorities, and the predator had not been seen since — she kept Pao indoors, much to his evident sadness and depression.
Then came another shock, this one even worse than the first one. One sunny spring day, Regina filled a bowl with freshly cooked, cut up rotisserie chicken for Pao, and because the weather was so beautiful, she placed him alongside his sister Kay Cee on the patio while she prepared dinner. Her husband returned home from work about twenty minutes later. He breezily asked, “Where’s Pao?” and she responded, “He’s on the patio with Kay Cee.”

As it turned out, Kay Cee was there; Paolino was not. The search began: Regina and her husband walked the woods, scoured the neighborhood by car, called neighbors, and re-walked the woods together and with friends.

Over the next several days, they intensified the search. They notified the police departments in town and in adjacent towns, called shelters, emailed veterinarians, prepared flyers and delivered them to delivered to hundreds of houses, contracted a phone service that called 500 homes in the area, and even engaged an Internet psychic.

Regina placed ads in the newspaper and walked the streets flagging down cars to hand flyers to the drivers. When someone called her to say that they had seen a white cat in their neighborhood, she rented a Have-a-heart Trap with rotisserie chicken as a lure, only to trap another white cat, which enjoyed the chicken feast but ran for its life when she released the stranger from the trap. 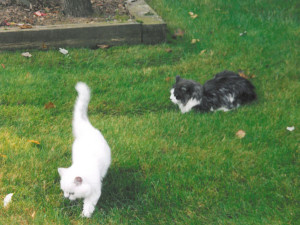 For nearly a year she sought any information that she could get about Paolino’s disappearance. Then, a psychic, a friend of a friend, told her that he had wandered off that fateful spring day to a woman that he knew and did not fear, a woman who was an animal lover, and especially a cat lover. Regina asked if the woman was her neighbor, an elusive loner, who at best could be described as “odd.” This woman had loved Pao, who played with her cat sometimes. The psychic would not answer the question, but, rather, told Regina to approach the woman and to tell her how much she missed her kitty and how much she would like him to return.

And so, it was on a 20-degree Saturday in winter that Regina bundled up in coat, scarf, and boots, with flyers in hand, to approach her neighbor’s house.

When the neighbor answered the door in a pink chenille robe and bare feet, (she must have shucked 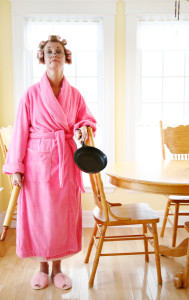 her slippers somewhere) Regina told her what the psychic had suggested that she say and spontaneously began to cry. The neighbor looked at her with scorn and said flatly that there were foxes in the area that may have gotten Pao, or that he might have simply run away.

After about twenty minutes of listening to the unfeeling talk, Regina asked if they might go into the neighbor’s house to continue the discussion since the woman’s bare toes were turning blue from the cold.

In fact, Regina wanted to be inside the house to find any evidence of Paolino. The neighbor let her into the foyer but positioned herself directly in front of Regina so that her back was only a foot or two from the front door. The woman looked nervously toward the floor around her as if she were expecting something to run into the foyer. Her behavior was extremely odd. Regina spoke loudly so that if Pao were being kept in the house, he might hear her voice and react somehow.

THEN IT HAPPENED. Regina heard a distinctive cat call from the second level of the house. The call was very similar to the way that Paolino used to call 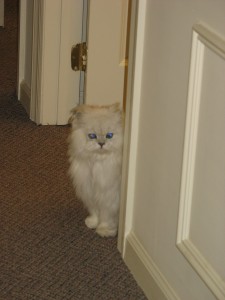 her. He didn’t meow, he simply had this call that he used, one that she had never heard from any other cat. At the sound Regina froze, and her neighbor jumped visibly and looked around wildly as if she were expecting something. There was no second call.

Regina knew that it was Paolino. Thoughts raced: She couldn’t bring herself to run through the woman’s house to the second floor. She didn’t know if she should contact the police. She was slightly fearful of the woman because of her odd behavior, and she didn’t want to accuse her without absolute proof. She also believed that if Pao were here, on some level he wanted this. After all, the psychic had told her that Paolino went willingly with the woman on the day of his disappearance.

Regina fully accepted the possibility that Pao might be living with her neighbor. After all, he had lived with others before he came to live with her. As a rescued kitten he had lived with the rescue worker for a while, and she didn’t know where he had lived before that. Her family was just another stop along his way.

She had experienced much personal growth when Paolino was with her. Even her husband and Lucia and Kay Cee had changed for the better. Pao had taught them many lessons during their daily interactions, and he had been a bright light guiding them. The magical kitty had done his work, and they all benefitted.

Regina will never forget Paolino, and she wanted to celebrate him in a special way. And so she wrote “Lessons of Pao.”